How to visit the Uffizi in Florence

The Galleria degli Uffizi in Florence is one of the most important and worldwide best known Italian art museums. It holds a huge collection of priceless works, particularly from the period of the Italian Renaissance. The artworks inside the Uffizi are reflecting the important role of Florence as the cradle of the Renaissance artworks and of some of the most important artists from this period (who were born and/or developed their career in the Tuscan city).

Initially the “Uffizi” (Engl. “offices”) was not created to be a museum. The building itself was ordered in 1560 by Cosimo de’ Medici (the famous Medici family was an Italian banking family, political dynasty and later royal house) in order to house the administrative and judiciary offices of Florence.

In 1581 Cosimo’s son, Franceso I de’ Medici, set up a private Gallery on the top floor of the east wing with paintings, statues and other precious objects from the private Medici family art collection. At this time the art museum was only opened to wealthy aristocrats who had a good connection to the Medici family. The immense wealth and the Medici family’s big passion for art was the main reason why the art collection was becoming vaster and vaster. It got continually enriched by every member of the dynasty until the family died out in the 18th century. With the growth of their art collection more and more space inside the Uffizi was needed until the offices were completely replaced with exhibition space.

Only in 1769 the gallery opened to the public, today it’s the most visited art gallery in Italy and exhibits among others: 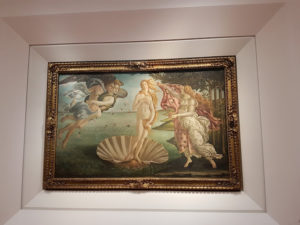 How to buy tickets?