How to visit Michelangelo’s David statue

The Galleria dell’Accademia is an art gallery most famous for its marble scultures by the great Renaissance artist Michelangelo. His Prisoners (or Slaves), his St. Matthew and, most of all, the impressive statue of David are exhibited. Beside his works precious sculptures and paintings (mostly from the period 1300-1600) from other great Italian artists such as Sandro Botticelli, Domenico Ghirlandaio, Pontormo, Andrea del Sarto, Allessandro Allori and Orcagna are exhibited.

The museum adjoins the Accademia di Belle Arti (academy of fine arts) of Florence. It was in 1784 when the Grand Duke Pietro Leopoldo of Lorraine re-founded the Academy of Fine Arts, bringing together the various institutions, including the former Academy of Drawing Arts founded in 1563 by Cosimo I de’ Medici. The new art institution was joined by a gallery wehre students could find works of art for their knowledge, study or artisitc training.

1872 marks the final turning point in the history of the museum, when it was decided to transfer Michelangelo’s David from its original open-air placement on the Piazza della Signora, in front of the Palazzo Vecchio (today there’s still a replica exhibited), into the art gallery for having a better protection against environmental influences.

In August 1873 the statue was snatched into a wooden carriage assembly and was pulled on rails down the streets of the center to the art gallery. 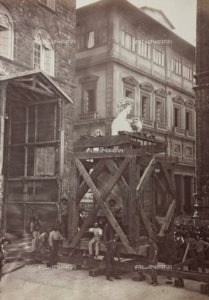 How to buy tickets?

Watch my guide video about the Galleria dell’Accademia
0 comment

When in Florence eat the famous Bistecca alla Fiorentina